Hello guys! There is something that came to my mind when I thought about Jewelry Bonney and her connection to the WG. Something that I couldn’t just keep for myself. I am excited what you guys think about it. So here I go…

So first of all, I know all the theories out there concerning her possible connection to the WG, more specifically being the one that keeps the Gorosei alive. I am not gonna argue against the idea in general, but there is one part that bothers me ever since I first read it. Most people think that Bonney was able to escape Akainu/ the WG because she and her powers are so important to the Gorosei. Therefore, they had to keep her alive and she somehow managed to get away. But for me, this really seems like a contradiction. If Bonney really was that important, how could they let her get away? Wouldn’t they do everything to keep her locked up somewhere deep inside Maryjois, especially when they already made that mistake and let her escape once before?

I mean, we have already seen how good the WG is when it comes to keeping certain people as prisoners. The Whitebeards + Luffy couldn’t rescue Ace. Even the most dangerous pirates couldn’t escape Impel Down for 20 Years. Yet, Bonney – who isn’t even close to the power level of an Ace – could escape them? Without any help? I can’t really believe that.

As I already said, I don’t doubt that she actually is the one who keeps the Gorosei alive. Yet, I doubt Bonney would have been able to escape once again if she got caught by the government. So here is what I think that happend: Akainu never captured Bonney!

Remember, in chapter 595 we only see Akainu talking to Bonney. But we never actually saw him take her away. 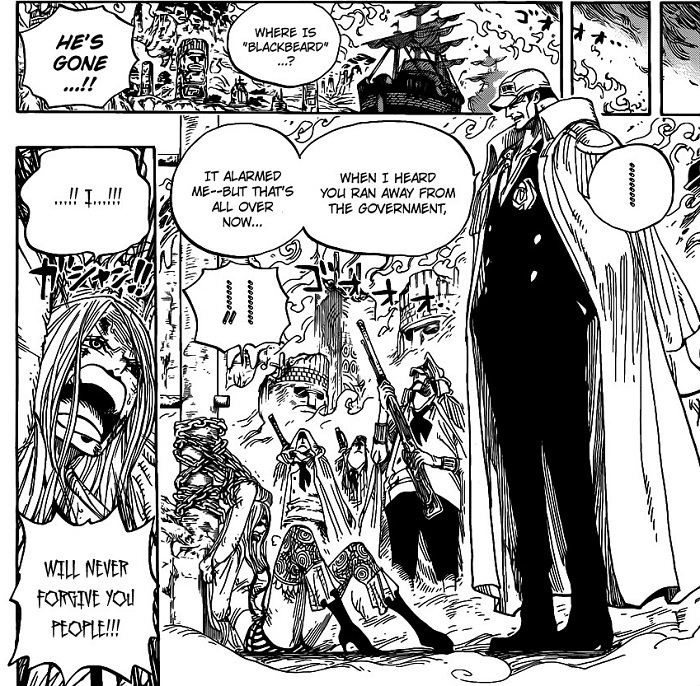 Akainu is not the type of guy that lets prisoners escape easily. So I think what happened is that Akainu actually freed Bonney and told her to get away and stay incognito (that’s why we’ve only seen her covering her face afterwards). Maybe he killed all of the remaning crewmates and maybe even some of the marines who witnessed the conversation between Bonney and him. This would totally fit his ‘absolute justice’.

The big question that should come to your mind now is: why would Akainu let someone with that power, someone that is so important to the Gorosei, run away?

My answer: Akainu is actually planning a coup d’état and wants (the marines) to take control over the Government.

As we can see in chapter 793, Akainu holds a grudge against the Gorosei. He disagrees with their way of doing things and obviously hates the fact the he has to take orders from them.

But Akainu has been shown to be loyal to the Government so far, some of you might say.

Yes, that’s true. I am not saying he wants to destroy the Government or something. He just wants to gain the power over it, which – at the moment – belongs to the Gorosei. Plus, he had to be loyal to become the fleet admiral in the first place.

I also think that this kind of move would totally fit his character. He has shown to be a very strict man who would rather surpress his enemies with force than negotiating or even compromise with them. So a lot the government respectively the Gorosei does (for example the Shichibukai system, spreading false information, etc.) does not really fit to his way of thinking. A coup d’état would make perfect sense for him.

But Akainu ain’t stupid. Actually fighting the Gorosei would make him an enemy of the Goverment and therefore he would never be able to take controle over it. So when Blackbeard called to offer the deal to him, Akainu came up with the idea to free Bonney. This way, the Gorosei will start to get older again and since most of them are already pretty old, they will sooner or later die. And this is the moment Akainu and the marines make their move and take the power over the World Government.

In short:
Akainu wants to take over the control of the Government, because he disagrees with the Gorosei’s way of doing things. But since he can’t risk to openly fight them, he uses Bonney ,who’s Power keeps the Gorosei alive. When Blackbeard captured her, Akainu let Bonney escape so that the Gorosei coldn’t make use of her power and therefore would sooner or later die of age. This way, Akainu could take over the Government without risking to look like a traitor or enemy.

Please tell me whether you think this is possible or not! Thanks for reading.