Kuina had come to the conclusion that Zoro would soon pass her in skill and strength. This is because she believed that boys grow up to be stronger than girls, and she noticed just how much Zoro had already caught up to her current skills. So, when she started growing breasts, she became discouraged. Zoro then told her that if he ever beat her, it was because of his skills. The fact that he was a boy and she was a girl did not matter. It was his goal to be as good as her. They promised that one of them would become the greatest swordsman in the world.

However, the day after making their vow, Zoro learned she had fallen down the stairs while trying to get a sharpening block and died. Zoro was angry with her, accusing her of running away from their promise. Finally, Zoro asked her father for the honor of taking the Wado Ichimonji with him. With this, Zoro promised to fulfill their shared dream of becoming the greatest swordsman to fruition and developed Santoryu so that he could wield both Kuina’s sword and his own. 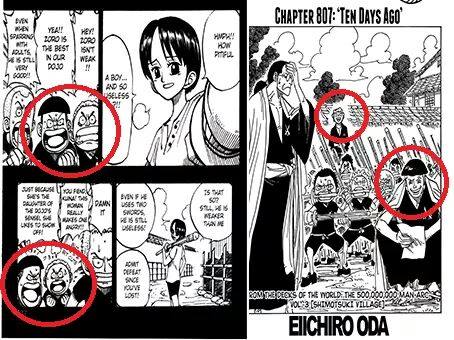