Popular Shonen series’ in One Piece and Dragon Ball Super are both getting two one-hour anime specials next month. Both Luffy and Goku are having their own epic adventures with Luffy’s set to air on October 1st at 9 am and Goku’s will be the week after, on the 8th of October. 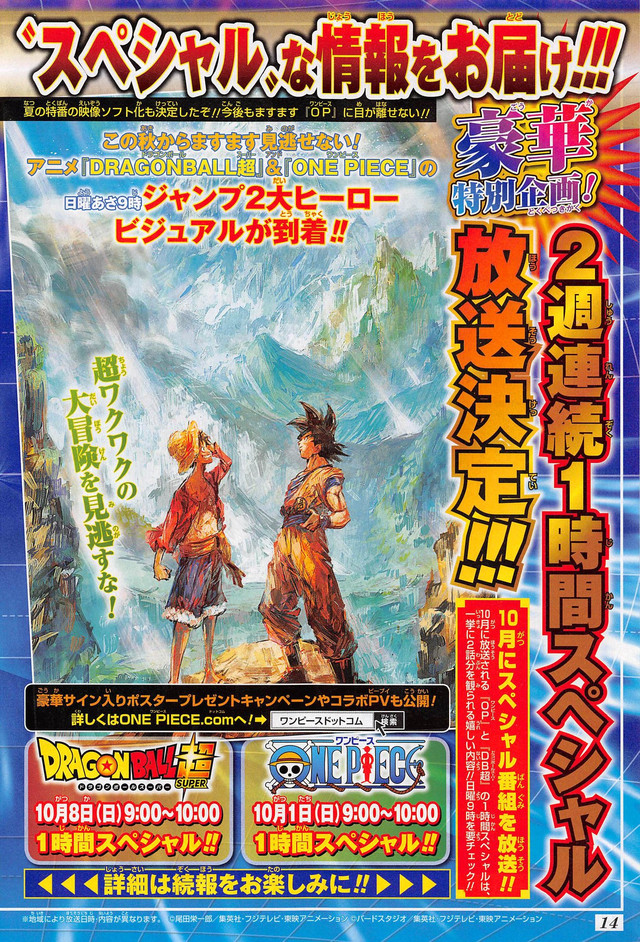 As a result, Jump magazine has released this new key-art in celebration of the two having their own special one-hour broadcasts. The key-art raised the hopes of fans of both series’, as at first glance you might assume that the two would get a joint crossover episode. However, that is not the case, but fans will still be pleased with the one-hour TV specials.

The key-art showcases Luffy from One Piece and Goku from Dragon Ball Super looking off into the distance, with them looking as if they are about to take a journey together on the mountains ahead.

At the moment, fans are watching Luffy and the other Straw Hat Pirates immersed in their latest adventure, during the Whole Cake Island arc. In this one-hour special, fans will watch as things get quite heated indeed, as they try to stop Big Mom. Big Mom is arguably one of the strongest opponents our heroes have ever faced.

Meanwhile, as for Dragon Ball Super, fans are currently enjoying the Tournament of Power, where eight of the twelve universes lives hang in the balance. In this episode, Goku will be facing his strongest mortal opponent yet in Universe 11’s Jiren. This will also likely be the episode Dragon Ball Super fans get to see Goku’s new transformation in full swing, as Super Saiyan Blue mixed with KaioKen x20, isn’t enough to defeat Jiren. The upcoming one-hour specials will please fans of both series’, as they get more One Piece and more Dragon Ball Super, which they can never get enough of.