It was stated that all Marines ranked vice admiral or higher possess Haki, so Fujitora can also use the ability.

Fujitora could clash head on physically with Sabo, a Logia-class Devil Fruit user and also a proficient Busoushoku Haki user, demonstrating an extremely high level of skill in Busoshoku Haki. He could focus strong concentration of Busoshoku Haki into his sword, turning it obsidian black and making it strong enough to defend against the razor sharp threads of the Birdcage, which can slice cannonballs and buildings with great ease. 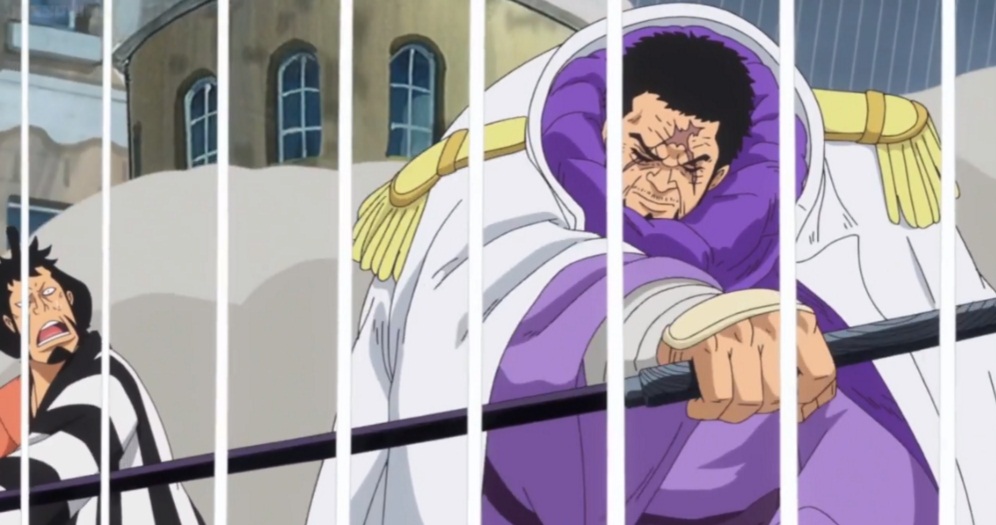 Fujitora is also masterful in Kenbunshoku Haki, which he used to compensate for his blindness in battle. His incredible skill in Kenbunshoku Haki gives him a strong sense of danger. He can accurately predict fast attacks from enemies such as an unexpected kick from Doflamingo. In the anime, he could sense Doflamingo’s fast Parasite thread and even grabbed it before it took control of him. He also correctly sense an enranged Pica preparing to attack before his subordinate pointed out to him. In his fight with Sabo, he could keep track of Sabo’s extraordinary agility which is enhanced by the fire based powers of the Mera Mera no Mi, but the most prominent example is his capability to see his surroundings in a form of an aura which is not impeded by his blindness. Similar to Otohime, Issho can also read and hear the true thoughts and emotions of other people as he was made aware that the Dressrosa citizens had no ill will towards Luffy while they were “chasing” him at the Dressrosa coast.

Fujitora’s Haki 2017-09-18
admin
Previous: The Rumbar Pirates
Next: Coby’s words at the Marineford