LUFFY’S MOTHER WAS D, AND PERHAPS RELATED TO ROGER Theory

So I was doing a little thinking about all the “D’s” we have seen introduced so far in the series, and I realized something. Jaguar D. Saul stated that even though he didn’t know what the meaning behind the D, he said that EVERYONE in his family carried the initial in their name. This means that both Saul’s mother and father were both D’s. Now when we look at Portgas D. Ace, we know that his mother and father are also both D’s. With this information, it leads me to conclude, that in order for someone to be a “D” that both of their parents has to be D’s. Now obviously his mother couldn’t be a Jaguar D, unless Dragon is walking around with some seriously heavy duty machinery (if you know what I mean

), nor could she be a Monkey (Because that would just be ewww) So that means there could only be two possible options, either his mother is one of the known D’s we’ve seen so far in the series (Gol, Portgas, or Marshall) OR she is knew carrier of D, yet to be introduced. I’ve opted to believe that she is a carrier that has already been introduced, because I don’t think Oda is going to go overboard with the D bloodline.

So why a Gol? The answer is actually really simple, and it’s because Luffy looks almost identical to a young Roger. 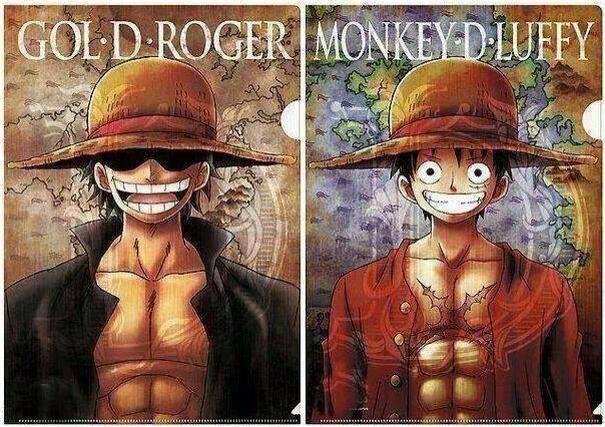 Although we are never shown Rogers eyes in his younger age, what we did see of him, the similarities are uncanny. I always thought it was a little strange that Luffy looks nothing like Garp or Dragon, but bares such a strong resemblance to Roger. It would make perfect sense for him to look so similar to Roger, if his mother is in fact a Gol, and he gets his appearance from her.

The other possibilities is her being either a Portgas D. a Marshal D. or an unknown D. I’ve ruled out Portgas for obvious reasons, and I’m not to opposed to her being a Marshal D, because that would add a huge twist in the sense that Luffy is in some way related to Blackbeard, but even so, I think that would be a bit of a stretch. As far as her being an unknown D, like I stated before, I don’t think Oda is going to be going to overboard with the D. bloodline because it’s fairly obvious that the Will of D plays a huge roll in the over all storyline, and Oda isn’t going to over complicate it by adding more and more D’s to the mix.

Anyways I know probability of her being related to Roger is very very small, but I’m willing to bet Shanks right arm, that she is definitely a D. So if you guys don’t think she is a Gol, what would be your pick?