MEANING OF THE “D”/IT’S NOT THE DEVIL

We all have been reading so much theories surrounding the letter D in names of important characters in OP. And mostly they say it stands for DEVIL, the ones who oppose Gods or should we say now Royalties. What i think is a bit different. The letter D stand for Death. The reason behind this is that so far we’ve got to know 9 different characters who have letter D the in their names. 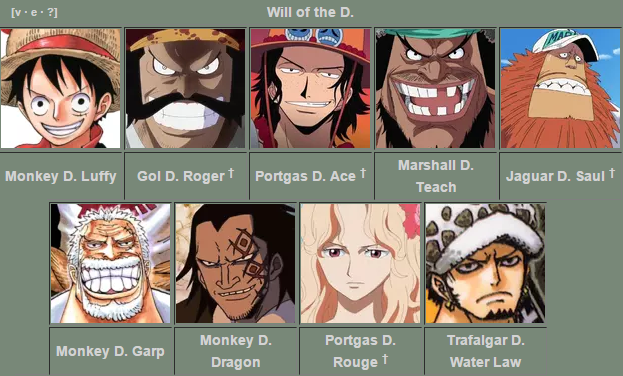 You can see in the picture that i uploaded, 4 of 9 characters are already dead. So my theory is that the D or should i say curse brings violent death to them or to people whom they love if they don’t sacrifice themselves instead. Maybe that’s what Roger knew (hearing the poneglyphs) and that is the reason why Gol D. Roger surrendered himself to Marines, because he didn’t want that curse to affect his kid – Portgas D. Ace. Perhaps they are destined to die while protecting others and there is no other way to escape death and that’s why Roger died by the hands of Marines, to protect his son. And the reason why he entrusted Ace to Garp because he Roger knew the secret behind the name and was sure that the Garp was the best choice to protect Ace considering D in his name and what it stands for. Maybe the D has a double meaning – Death and Defending (the ones you love). Garp eventually didn’t sacrifice himself to protect Ace, and Ace died – and we all now how important and loved Ace and Luffy were by Garp, even if he didn’t show it. Perhaps in future Luffy will be in mortal danger and Garp or Dragon will  die to protect him.
Now if we look upon other characters who also died in OP, we can see that they died while protecting others. So Roger and Portgas D. Rogue died protecting their son, Jaguar D. Saul died protecting Nico Robin and finally Ace died while protecting Luffy. Trafalgar D. Law was a kid and couldn’t save the ones he loved. that is the curse considering D or should i say Death of the name bearers.
*Theory by Irbas Škrinjarić
garp gol d roger jaguar d saul Luffy Marshall d. teach MEANING OF THE "D"/IT'S NOT THE DEVIL monke d. dragon nico robin One Piece Theory Portgas D. Ace rouge straw hat pirates trafalgar d. water law 2015-11-27
admin
Previous: WHY RAYLEIGH IS CALLED DARK KING
Next: THEORY BEHIND BLACKBEARD’S BODY STRUCTURE