Firstly, I would like to point out that Weeble isnt WB’s son. Its not because he looks dorky/ugly but its because WB would have at least rememebered his lost family moments before he died. Also, WB isnt the type of person to go by looks… if you genuinely want to his son, he will take you in regardless of your past and looks. Weeble being old, never met WB. So he never had the chance to proclaim his place as WB’s son.

Going by Weeble’s looks and behavior, he was most probably a mamma’s boy.. but wait! What are those scars? Was it done by Moria? Or maybe Hogback? Probably a fight he had with someone strong? No.
Those scars were inflicted by Miss Bucking herself. Why would she do that? To control Weeble. Miss Bucking designed chains and spikes and kept Weeble locked up somewhere to completely tame him and his monstrous strength.
I presume she had come across an abnormally strong child, kidnapped him and completely reconditioned him(Weeble). NOTE: Weeble has a monstrous strength. And as a child he was far stronger that others. Torture and brainwash was the best option Bucking had.

Btw, a large mustache doesnt mean he is related to WB.

Why did miss Bucking resort to kidnapping? Because her own child was a disappointment

Bucking is probably a bounty hunter and a thief. She most likely used strong people in the past to work under her and gained notoriety in the NW. After her mercenaries got old, she decided to restock on new ones, Weeble being one and the other being

She was also raised by Bucking and was told the same lie- she is the daughter of WB. Bucking being a smart criminal, made sure that Bonney and Weeble never mentioned anyone about this secret citing harsh punishments or external complications(Marine involvement or pirate involvement).

Bonney managed to escape(still oblivious to the lie) but Miss Bucking kept hold of the strong one. That is why after WB died, she surfaced again and started calling herself WB’s wife and Weeble as the son. And I presume the 480 million berry was quickly granted to him because of his lineage, albeit a lie, and also due to the fact that someone had suddenly arrived who could cut off former Admiral Zeyphr’s hand and decimate the crew.
—————————
Coming back to Bonney, when she confronted BB, she blurted out the lie Bucking fed to her all those years ago… thats why BB decided to use Bonney as a bargaining chip. Here is what Akainu says 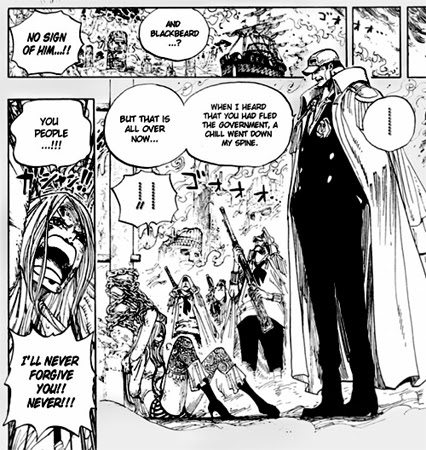 What does he meany by “fled”? Going by the context of what I wrote, ‘fled the WG’ means the way she had managed to hide her origin and escape capture.
This also explains why she went out to sea: to find her father. But as fate would have it, she was denied

As for Weeble, who is his real father?

Here’s what we know

His father is none other than Shiki was insanely strong- took Sengoku and Garp to stop his rampage, but the fight destroyed half of marineford
Has the spiky back hair
He was also emotional and outraged when he heard Roger was caught and to be executed.

Weeble inherited the inhuman strength and durability of Shiki. No wonder Kizaru comments that it reminds him of WB in his young days(maybe early 30s) whereas it is in fact the strength reminiscent of Shiki, rival of WB and Garp.

Below is the link to chapter 0 of OP. In case anyone forgot what Shiki can do, you can reread it.

Finally, I have a feeling BB is gonna recruit Weeble by making him his ‘son’ and make him kill his ‘mom’.