MONET IS BASED OFF OF SNOW WHITE(MONET IS ALIVE?)

In this theory I am going to show you most of what I could find that I thought Monet could be inspired from and make a theory based off what I could find. When Oda bases a character off of a story he doesn’t tend to completely copy it. He tends to make his own version of it. Crocodile for example could be loosely based off of Captain Hook which is ironic considering he named him Crocodile. An example of Oda loosely basing something off of a story is Fishman Island. Certain elements of Fishman island could be based off of The Little Mermaid and Urashima Taro. If you know the story of Urashima Taro you would know that Oda has completely made his own version of it, so Oda using only a few aspects of a story(and changing some aspects) instead of every major part of the story is completely possible IMO. It’s also pretty hard to find which version of a story Oda might have been inspired by, as each story usually has multiple variants and Oda may have mixed the different versions of the story and made his own.

Now the most obvious inspirations for Monet are Yuki-onna, Harpy, and Claude Monet. But if you investigate further you may find other inspirations that could fit.

-Monet is an actual snow woman.
-“Can transform into a cloud of snow if threatened” – Monet is a logia user and can turn into snow.
-“In many stories, Yuki-onna appears to travelers trapped in snowstorms, and uses her icy breath to leave them as frost-coated corpses. Other legends say she leads them astray so they simply die of exposure. Other times, she manifests holding a child. When a well-intentioned soul takes the “child” from her, they are frozen in place.” – Monet was trying to keep the giant children at punk hazard.
https://en.wikipedia.org/wiki/Yuki-onna
​—————————–
​2.) Harpy
-Harpy’s are women with bird parts – Monet has bird parts(I have a theory regarding how she has bird parts but I will make another thread for that)
-Harpy’s are sisters
Below are some similar mythological creatures
-1.) Sirin
-Half bird, Half woman
-“She symbolizes eternal joy and heavenly happiness.” – Monet’s shirt/picture​
-2.) Siren
-“Later writers have implied that the Sirens were cannibals” – Monet biting people in snow form
-Half bird, Half woman
-“The siren sings so sweetly that she lulls the mariners to sleep; then she climbs upon the ships and kills the sleeping mariners.” – No singing, but Monet tried to put Luffy to sleep and freeze him to death/picture
https://en.wikipedia.org/wiki/Harpy
​———————————————

3.) Claude Monet(using paintings that might reference Monet/this is where my theory starts)

-Claude Monet was a famous painter and we know that Oda has shown us references to other artists. Oda referenced multiple artists with Jora’s Ato Ato no mi. Zou is also a reference to “The Elephants” by Salvador Dali. So It wouldn’t be surprising for Oda to reference Claude Monet with Monet’s name.
-The first painting that most people relate to Monet is “The Magpie” because the painting has snow and a magpie bird in it.
(Before you read ahead, I need to mention that I do think that Monet lived by using suspended animation so this just makes sense to me)​
​

-He also made a series of paintings of water lilies. Now many water lilies can be called lotuses and vice versa even though they are of a different genus. These flowers in a few different cultures are considered to represent rebirth. The pink lotus can also revive itself in a way through suspended animation also. I think the lotus and water lilies are supposed to represent Monet IMO. Now if my memory is correct, then lotuses were a significant flower in the story of the Odyssey. From wikipedia – “The lotus fruits and flowers were the primary food of the island and were narcotic, causing the people to sleep in peaceful apathy“. Whoever ate the lotus did not want to leave the island of the Lotus-Eaters. This reminds me of giant children on Punk Hazard who didn’t want to leave because of the drugged candy being fed to them by Monet and Caesar. You know what else is in the Odyssey? Sirens.
-There is another painting I want to mention which is “Camille Monet on her deathbed“. In this painting it looks as if she is encased in ice.

-I mainly thought of this character because of the chapter 800 cover/picture depicting Robin as Snow White and obviously when you hear snow, the first person that comes to mind when thinking of One Piece is Monet. But there aren’t that many aspects that match up which is a problem. We already know that Oda likes to base characters off of stories even if it’s only by a small amount which is another reason why I think Monet could live through the same process Snow White lived which is suspended animation. In the story of Snow White, she was placed inside a glass coffin because she was thought to be dead when in fact she was not just like how Monet is thought to be dead. Just know that even if Monet is alive, we probably won’t end up knowing who represents each aspect of the story until it’s confirmed or not if she alive.

So the major parts of Snow White are the 7 dwarves, the huntsman, the queen, the prince, magic mirror and the poisoned apple.

-7 dwarves – I have no idea at all. It might not have taken place yet, or just won’t happen as Oda might have not bothered with that aspect. Maybe Luffy, Law, Zoro, Robin, Franky, Barto, Gambia/Jinbei? (Edit: 7 dwarves could be the allied crew captains)

-The Huntsman – The huntsman is asked to kill Snow White and bring back her heart to the queen but brings back an animal heart. Could possibly be Law or maybe Aokiji? This actually feels like a part where Oda made his own twist. This part could represent Caesar thinking he is getting Smoker’s heart when in fact he is getting Monet’s heart. (Edit: Caesar could possibly be the huntsman also)

-The Prince – I think the prince will end up being Sanji because of mainly his chivalry. (I doubt Oda would go the kissing to wake her up route. Sanji might just save her)

-The Queen – No clue, but in the old version’s of Snow White the queen was a cannibal and so is Big Mom. The queen owned a magic mirror. In a variant of Urashima Taro the tamatebako box had 3 drawers that contained a mirror, a pill that let’s you breathe underwater, and a crane feather that turns you into a crane. I am neutral to this part though.

-Poisoned Apple – A poisoned apple makes me think of SMILE. Caesar is the one who makes SMILE’s and he can create poison gas. (Like I said earlier I have a theory on SMILE that I will post in a future thread) In the old version, Snow White is awakened by a tremor that causes her to cough up the poisoned apple. There is a theory that Weeble has a watered down version of Whitebeards fruit and that it can produce tremors. As seen in Marineford, the Gura Gura no mi was capable of shattering ice very easily.​

Something else that is kinda interesting is that the story “The Snow Queen” contains a magic mirror and is about the snow queen kidnapping someone. In “The Lion, the Witch and the Wardrobe” one of the kids is kidnapped by the White Witch(who keeps it Winter forever). The White Witch can also petrify people like Caesar did with Shinokuni.

In the old version of Snow White, the Queen attempts to kill Snow White multiple times with different objects. You can find some of these objects in a color spread I had already previously believed foreshadowed Monet(Chapter 756). Poisoned comb, Magic Mirror, laced Bodice. In this color spread Sanji is wearing Clothes similar to Doflamingo’s, Chopper has a green towel over his head making it look like hair, and Nami is holding Monet’s shirt from one of her flashbacks. Another interesting thing to me at least is that Zoro is eating a squid which is one of the only animals that have two hearts(3 if you count the systematic one). Robin putting on red lipstick could represent Snow White’s red lips. 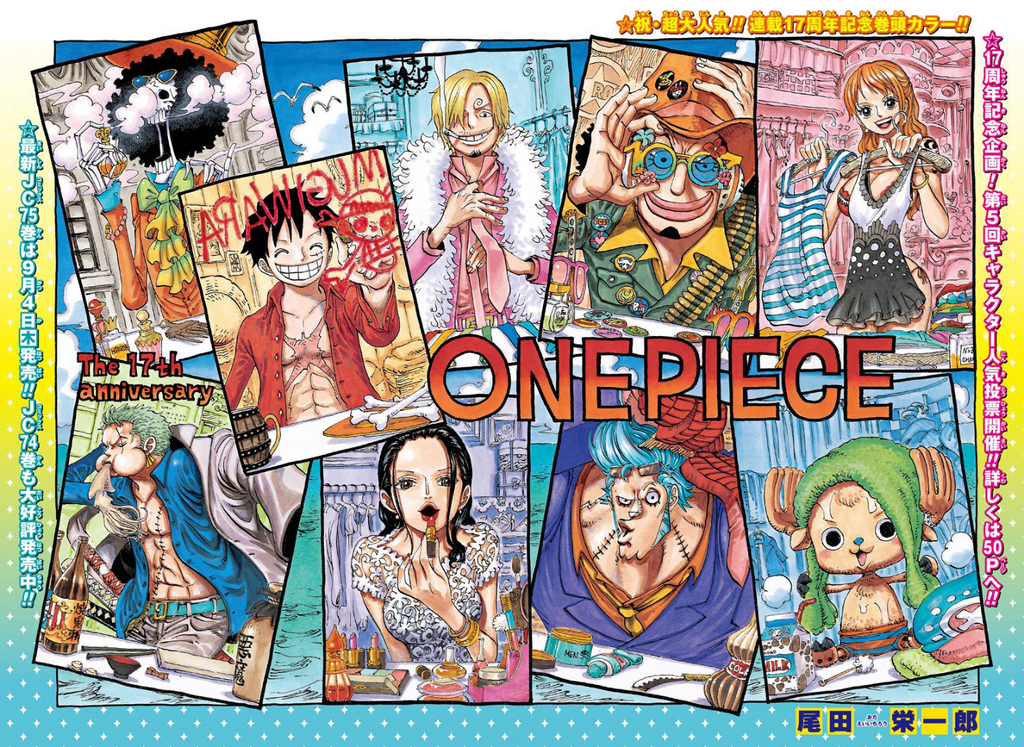 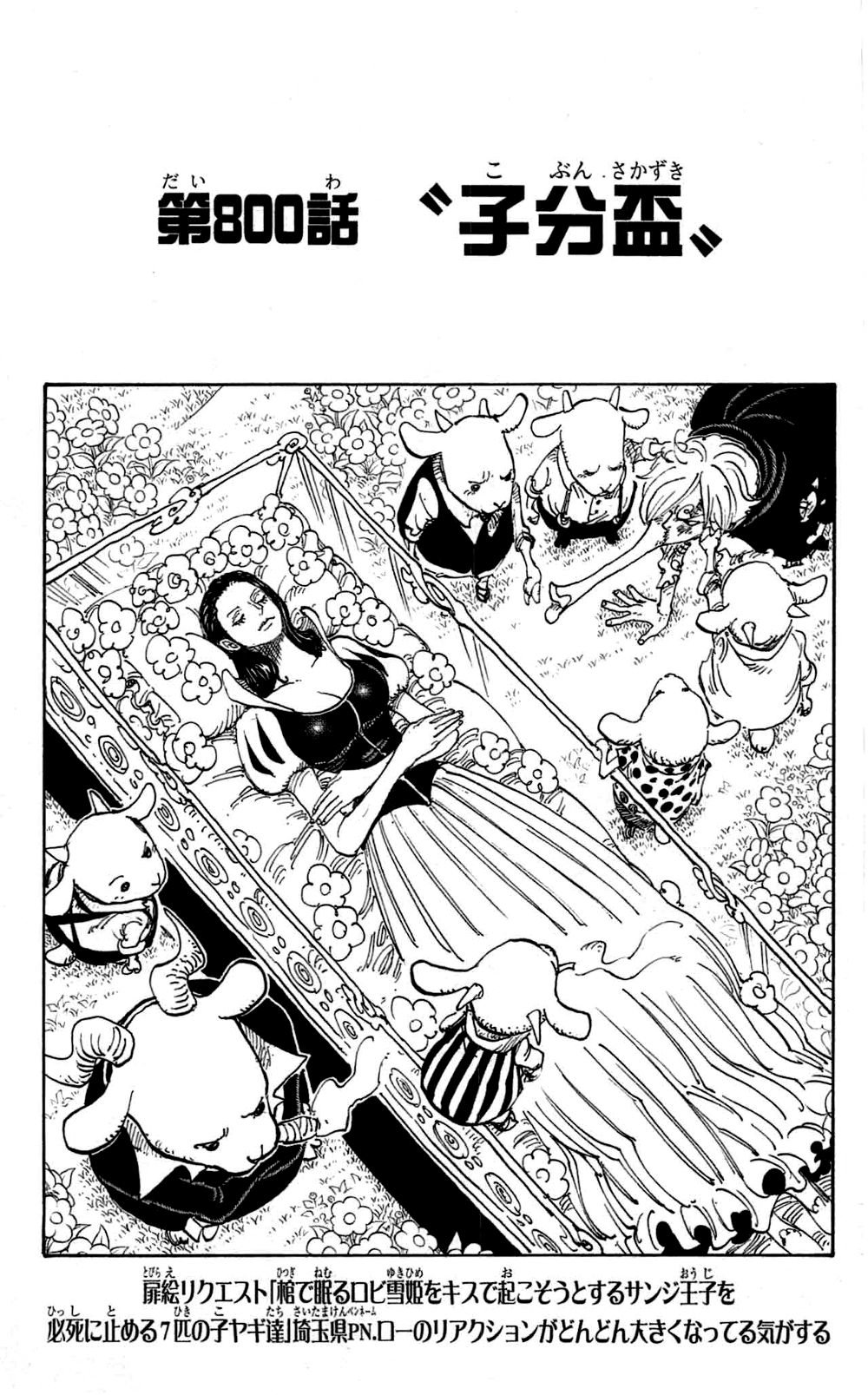 Conclusion?
​I think Monet lived through suspended animation. Oda likes to reference stories and now would be the perfect time to reference Snow White. Monet was unconscious after her heart got stabbed so I don’t think she could have put her self into a state like that. The last time we saw Punk Hazard was when Kuzan was on that island. He must have saw the broadcast by Caesar. Why he was there I have no clue. The most logical explanation was either that he wanted to help Smoker or that Blackbeard wanted him to get Caesar. I think Kuzan could have put Monet into a frozen state. Monet could live through that because of her Snow fruit that increases her resistances to the cold. It’s possible that the ice Monet will be encased in will be shattered by Weeble’s devil fruit if the Weeble theory is right. What happened to Monet’s heart? I have no idea, but the fact that Oda didn’t explain that makes me think he is hiding something. I also forgot to mention this – “Placing astronauts in suspended animation has been proposed as one way for an individual to reach the end of an interstellar or intergalactic journey, avoiding the necessity for a gigantic generation ship; occasionally the two concepts have been combined, with generations of “caretakers” supervising a large population of frozen passenger“. It’s interesting at least to me.