As you know Nami has consistently been fighting with the clima-tact, however i do not believe the clima-tact has reached it’s final form yet. That is why i believe Nami well gain an ultimate clima-tact.

WHAT WILL HER POWER BE
Well i have had 2 ideas

-Ohm’s weapon is made of iron cloudsword 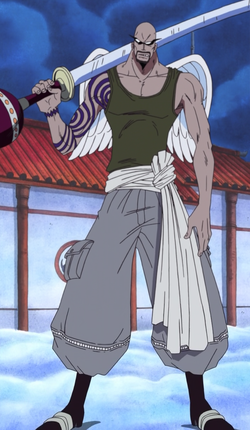 I personally think both of these would be good clima-tact power-ups, since they would require little to no charge up time; something that all her attacks need.

I believe this would be a good power up for Nami for a couple of reasons.

IRON CLOUD-BASED CLIMA-TACT
This clima-tact works by creating island clouds inside itself, compressing the island clouds; then creating iron clouds, which can be turned into thunder-iron clouds to give them lightning properties. How would she make a clima-tact like this? Well if you didn’t know, island clouds are created by sea stone

This leads me to believe that she will get a sea stone clima-tact. I believe this is very likely because the SMILE factory is coated in sea stone and when it’s destroyed Franky will most likely take that sea stone to make weapons. I also believe she will use a breath dial, as sea stone only creates island clouds when a certain compound is released due to high temperatures. With this sea stone clima-tact, she will be able to create large amounts of island clouds rapidly. Then due to the narrow space inside the clima-tact, these island clouds would be compressed and turned into iron clouds. She could then spin the iron clouds rapidly to turn them into iron-storm clouds that shoot lightning.
Here are just some of the techniques that she could do with this: