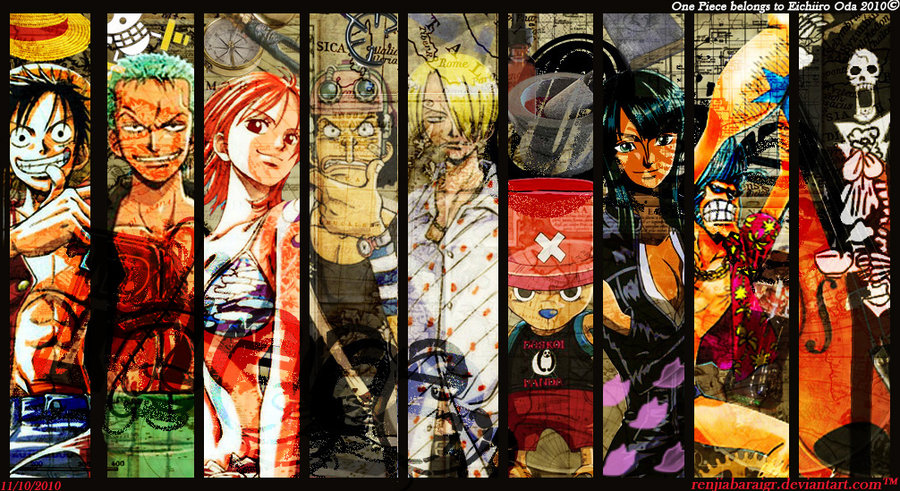 Monkey D. Luffy
– Luffy`s dream is to become the Pirate King like Gol D Roger. He started dreaming when he was a child in the East Blue which is his home town. His idol is pirate Shanks which eventually became one of the pirate’s Emperor.
Roronoa Zoro
– Zoro’s dream is to become the world’s greatest swordsman. His dream started when he was a child where he can’t beat his childhood rival opponent. In order to achieve it he needs to compete to all swordsman in the world and beat them all. He is also dreaming to defeat the Swordsman king Dracule Mihawk in order to become the world’s greatest swordsman.
Black Leg Sanji
– Sanji’s dream is to find the legendary place All Blue. In this place all the fishes and ocean creatures have gathered. His dream started when he was a child and trapped in a huge stone in the middle of the ocean.
Cat Burglar Nami
– Nami’s dream is to create the map of the whole world. In order to fulfill her dream she needs to travel in the whole world with his nakama(friends).
Sniper King Sogeking (Ussop)
– Ussop’s dream is to become a brave warrior of the sea like his father and to become the Sniper King of the world in order to help his captain to achieve his dream.
Devil Child Nico Robin
– Robin’s dream is to find the Rio Poneglyph which tells the true history of the One Piece world including the void century(900 years from now). She is also continuing the research of her teacher Clover from his hometown.
Tony Tony Chopper
– Chopper’s dream is to become a great doctor that can cure and heal any diseases in the world and to travel with his friend around the world.
Cyborg Franky
-Franky’s dream is to build his dream ship and travel until the end of the Grand Line. His dream ship can overcome any battles and adventure where ever they are.
Humming Brook
-Brooks ambition is to help his captain achieve his dream and to return in his hometown to meet his pet Laboon which is a whale.
Credits : TWG
brook chopper franky Luffy nami nico robin sanji sogeking Straw Hat Pirates' Dreams usopp zoro 2015-12-09
admin
Previous: MONKEY D. DRAGON’S MYTHICAL DF POWER AND THE ONEPIECE WORLD
Next: Zoro’s Santoryu Ogi: Ichidai Sanzen Daisen Sekai