Oda revealed the inspirations on which Dressrosa is based

D: Hello, Mr. Oda! I noticed that Dressrosa was based on our home in Spain, so I decided to send you this letter as the speaker of our group. Why did you choose Spain? If you ever have reason to visit Spain, I hope you visit Barcelona’s Saló del Manga (a Catalan manga/anime convention). Nothing to be afraid of! Our women don’t stab you! P.N. Voice of the Pirate King 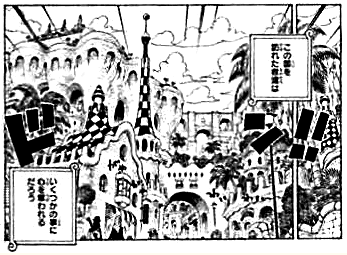 O: This is a condensed version of a letter I received from Spain. The Japanese was strange in a few places, so I think that must have come from one of those auto-translation sites. Thanks for the letter. You’re right about Dressrosa. It’s based on Spain, and Ancient Greece for the Colosseum parts.

When I took a close look at Doflamingo and tried to think of what country is suited him. I arrived at the conclusion of Spain. I’ve mentioned the lands of One Piece being inspired by real-life countries in the SBS before, but it’s the first time I got feedback from the residents of the country. I can’t be irresponsible in the way I draw, but if you do see anything that seems like a half-baked version of your culture or buildings, please forgive me. Remember, it’s just a manga.