WHY DEVIL FRUIT USERS SINK IN WATER: SECRET OF SEASTONE AND MORE

Hello once again everyone and welcome back to yet another theory for your entertainment. This I shall be going into further detail as to why devil fruit users sink in water and the secret of seastone.

As you obviously know, devil fruit users sink in water but what you may not know is that water doesn’t neutralize devil fruit powers. Luffy’s stretched arm was underwater but shouldn’t it have neutralize his powers and cause his arm to retract? There is also this: Aokiji fell into the water but inside of his power being neutralized, he used his ice to make it to the surface.

Here, Luffy is completely submerged in water but he cold still stretch. 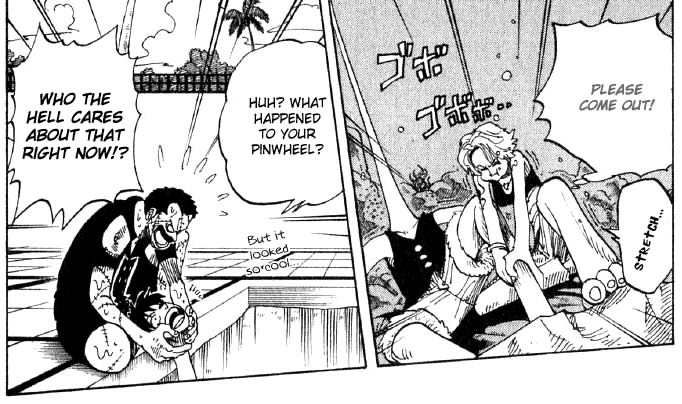 Water simply weakens devil fruits but still why? There is also the fact that seastone COMPLETELY neutralizes devil fruits powers but it has the “essence of the sea.” Also, unlike water, when DF users wear seastone, they can still move. What is the “essence of the sea”?

Kaku said he felt a “gravitational force” coming from the devil fruits. At first you would he meant it as an expression, but Kaku’s senses are quite good which made me think that he meant it literally. He was able to feel Zoro’s demon spirit.

The main reason I believe gravity is why devil fruit users sink and has their powers neutralized by seastone is none other than Marshall D. Teach, better known as Blackbeard. Now then, the tricky part was finding the actual relationship between water and gravity as a lot of factors fall into play such as mass, pressure and density. There is also the fact that there is less gravity underwater so get ready for a science trip.

Blackbeard’s darkness is a black hole. A black hole pulls an object in and once inside, the object is crushed under the immense gravity or pressure.

Seawater is more dense than fresh water(because of salt) so its easier for a human to float, but seawater has more pressure than fresh water as you go deeper. This is referred to as specific gravity, which is the ratio of the density of a substance to the density (mass of the same unit volume) of a reference substance.

The devil fruits contain the souls of people who lived in space. Space has less pressure and gravity(compared to Earth or Vearth). On Earth, gravity gives weight to physical objects and causes the tides so naturally, the souls of the space people should feel extra pressure. Gravity has an infinite range, and it cannot be absorbed, transformed, or shielded against. When submerged underwater, the souls would feel even more pressure.

Water- When in water, the host and the parasite feel pressure(the parasite even more so) but since they share the same body, the host feels the same effects of the parasite but can still use his/her abilities
(because its only a little pressure).

Pretty much, Blackbeard is walking seastone as they have the same effects on DF users. On the surface, they focus entirely on the parasite and uses the effects of a black hole and apply immense pressure on it. The parasite is suppressed while the host is just fine which is why they are able to move with seastone cuffs. Remember when Blackbeard black vortex against Ace? Ace felt pressure and was sucked in but when BB grabbed Ace he was fine, but the “parasite” was not. Why? Because BB’s body is still a black hole(when he uses his ability, he simply brings the black hole to the surface to affect people).