Tag Archives: WHY DOES JUDGE HATE SANJI SO MUCH?

The denial of a rare power.

So as the heading suggests we will look into Judge’s hate towards Sanji and try to find a possible reason behind it.

What does Judge want most?
What we see from Sanji’s backstory and the current WCI ark we can recognize that Judge desires power most of anything – the power to rule over North blue.
So basically after Sanji did not develop any super human strengths he denied him the chance of a power increase. However, I think there is more to it.

But lets first start in a logical order that I think will be the easiest way to convince you in this theory.

So lets look of the Judge’s work. He is a scientist and from what we have seen about cloning and applying modifications he seems to be genetic engineer.
Quote from Wiki:
“Genetic engineering, also called genetic modification, is the direct manipulation of an organism’s genome using biotechnology. It is a set of technologies used to change the genetic makeup of cells, including the transfer of genes within and across species boundaries to produce improved or novel organisms”

So in an experiment or research the engineer would pick two or more species and try to combine specific characteristics in one of the organisms. That would suggest that the engineer has in mind a clear picture or expectations on what the result should be.
So knowing that, it can be easily deducted that Judge had some specimens/objects in mind that he wants to combine and in that relation he should have pretty clear expectations on the results.

Taking the Vinsmoke siblings as an example they all seem to have two common features – hard exoskeleton and super strength – plus a specific unique characteristic for each of them.
These unique characteristics seems to be the base for their nick names related with colors:

So what I am trying to say is that Vinsmoke Judge knew what to expect from his kids since he knew what species he had crossed, BUT he didnt know who will develop each specification.

So after the kids were born and they started to show signs of their powers by the method of elimination Judge knew for sure which specific power is missing.

Having anticipated all the powers Judge probably had a power that he was looking forward to most. So is it possible that Sanji actually was the embryon which was supposed to have this mostly anticipated power?

Even after his researchers have told Judge that Sanji is nothing but human he seems like desperately mad of that fact. Even though he is a man of science he still goes to confront Sanji and scream at him that it is not an option for him to be a failure. 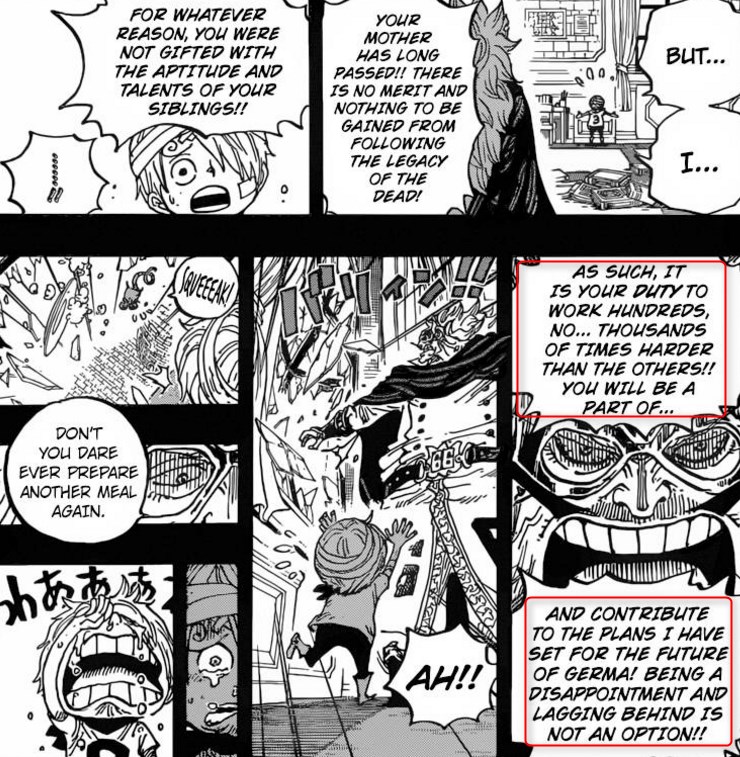 After that when Judge had no option but to accept the reality provided by the data he went to such a length to even get a tear in his eye when the confirmation was endeviable.

The only other time when we saw Judge cry was when BM pirates were about to execute Vinsmokes and Judge realizing that his dream of ruling over North Blue is coming to an end.
Could this mean that Sanji failure was some what the end of one of Judges dreams to see that specific combination of powers that is missing from the list??? Could have this been the most promising combination that Judge was looking for???

Conclusion
So in my opinion Judge does not only hate Sanji because of his lack of superhuman trends but mostly because he denied him the specific power that Judge was looking forward to the most!

Speculation
And here it comes a bit of speculations

Funny enough all the Vinsmoke kids were given a color as a representation at some point of time probably by Judge. Even though Sanji was far away from that situation he ended up having a color in his name as well. Having in mind that Judge have connections in the government and he can manipulate wanted posters (switching Sanji’s poster to only alive) could he have a role in that name? The possibility is really low but it is interesting possibility

Anyway my point is that somehow Sanji got a color in his name and comparing the names of his siblings it looks like Sanji is missing an adjective for his color. Lets see what can we deduct.

So thinking about the statements from above that Judge could have been looking forward to this combination, the specific unique characteristic must be something rare.
Combining that it must be something rare and the constant comparison of Sanji being a demon, could his undeveloped powers be a related to a Demon?
So if I have to come up with a adjective for Sanji’s black color I can definitely see him as a “Demonic Black”