This is likely a theory that has been brought up before, but I would like to stake my own case for Vivi’s potential return in the future. In the theory I will also state pros and cons of this occurring to explore both sides of the argument. 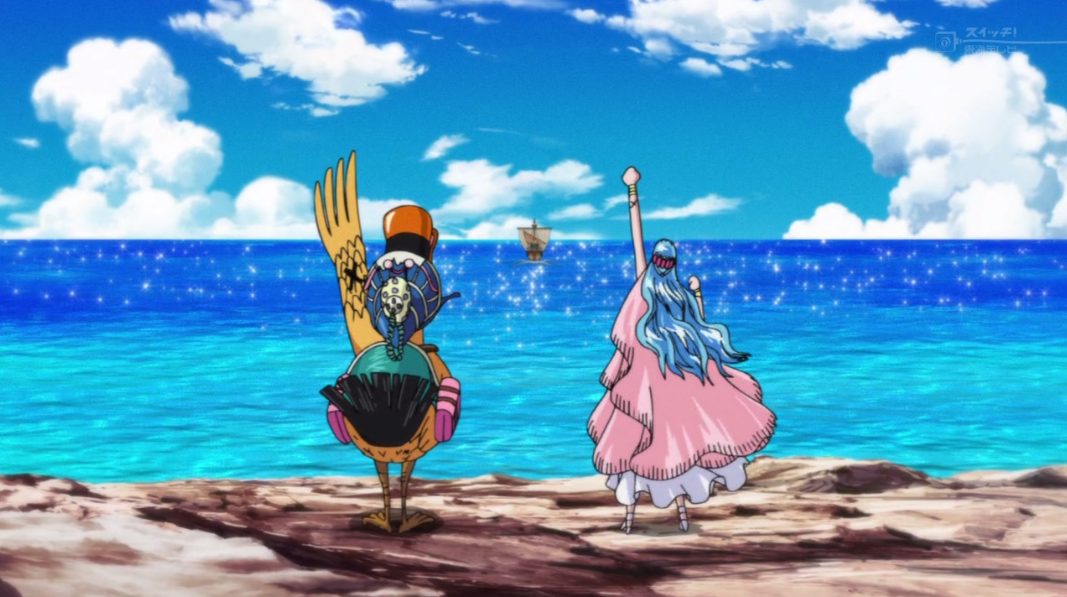 So, to begin, I would like to state this: I do not think it is guaranteed, but I believe there is a chance for Vivi to return in the future. Why is this?

First of all story relevance. Most people always argue that a person cannot join the crew after rejecting the offer because the SHs will be too far ahead to ever catch up. Vivi has an advantage in this case. She is attending the Reverie and it is likely she will be our protagonist for the arc given our familiarity with the lovely woman in question. Most importantly however, this means she’ll be in the New World. Unlike the vast majority of potential Strawhats who missed the boat (so to speak), she has the capability to ‘catch-up’ to her friends.

My second reason is what could happen at the Reverie itself. Now take this part with a grain of salt – this is conjecture, but at least conjecture formed through logical thought. It is clear that this event will change the world in some regard. We have the kings and queens of nations around the world meeting up in one location to discuss important political matters.

Over the course of the story, the Strawhats have no exactly been the quietest of visitors to every land they stop by. Many a time the crew have impacted the entire lives of the populace, overthrowing oppressive regimes and foiling dastardly villainous plots. They have won the hearts and minds of many and have thus made the people question the concept of good and evil, of justice and immorality. Not all pirates are evil, so does that mean not all marines are good?

The heads of these countries are staunch allies of the SH crew. Dalton of Sakura, Cobra of Alabasta and Riku of Dressrosa, these three support the SH crew in silent and believe that what they do is not wrong. Furthermore, these very kings have tasted the bitter stench of the darker sides of the world government. It is not illogical to assume, given their grievances that they start asking questions that nobody should be even uttering. These individuals, righteous and just kings and rulers would speak up when they shouldn’t and cause a stir amongst the Reverie’s participants.

Let’s also consider an even greater threat to a specific royal family, the Alabasta royalty. Wapol is visiting the Reverie and he may be aware of Vivi’s own participation in the overthrowing of his tyrannical rule. It does not take a far-stretch of the imagination to assume he could pour fuel onto the fire of Cobra’s own words and get them arrested or killed.

This offers two possibilities: Vivi gets captured and eventually sentenced to death, or Vivi escapes as a fugitive and the SH pirates rescue their friend. I do not think she is immune to the former fate, but part of me wants to explore the latter.

So, why would Vivi join the crew again? We need evidence, at least some. Fortunately, I have some non-conclusive evidence.

Take me with you is the name of the chapter and Vivi is on the cover staring out into the distance. In the background Carue is making a scrapbook.

We know dreams and living without regret is a very important theme in One Piece. We saw after the SHs departed, Vivi cried in her room when she realised the crew left and she had stayed behind. Part of her clearly regretted not going with her friends. The romance of adventure is something she clearly still seeks. It is not impossible to posit that Vivi still possesses wanderlust and desires to go back out to sea with her friends.

My next point revolves around Ace, Luffy’s departed brother. After Luffy’s message, she too construed the meaning, or at the very least understood there was symbolism behind the message of 3d2y. She keeps up with her old friend’s adventures, and this supports the idea that she has regrets or yearning for the sea.

Yet, there is more to the Ace point. I feel that seeing as she too met Ace, she has a special connection to the Sabaody group and Jimbei in that they all had a connection to the man who died for his younger brother.

We have established that there may be ‘regret’ and a ‘link’ for Vivi and the Strawhats. Never forget the promise. They will always be friends. She is nakama in their hearts, and they would clearly welcome her with open arms if they ever met again.

Time and time again, Vivi has expressed a faith in Luffy, even when separated, this is shown by her understanding of Nico Robin joining the crew. Luffy has a reason, and if he made the decision, it’s going to be a good one.

With this evidence, we must ask how it could come to be. Vivi still has Alabasta. Vivi still has her father. Sadly, chapters insinuate that Cobra does not have much longer to live. Furthermore, the events of the Reverie could throw their status into question. They may lose everything. Alabasta may get attacked for siding with pirates. Such an event would give the woman a dream. To save her country. She’d need to help of the future Pirate King. Through sailing with him she could accomplish this dream.

The above is of course conjecture, but it is not impossible. The theory gives credence to the notion that she could join the crew. I also think, given Vivi’s comment of ‘not needing suitors’, that she too has had thoughts of leaving. (Or it could mean she has a husband to be in mind).

Nonetheless, the opportunity is there. I believe the Reverie is the very last chance for a Vivi comeback.

Now, what discredits this theory?

Strength is the first issue. She is far behind the crew in terms of combat ability. However, there have been theories floating around for a long time regarding that Yuki Yuki no Mi. Whilst this is an off-shoot chance, a logia could give her the base level requirement of the New World, it would also give us the opportunity to see somebody use a logia on the crew. A devil fruit in general would greatly help her in terms of combat ability. Yet, without this, it is painfully clear that she is too weak for the SH crew.

What role would she fulfil? I believe she could be a mediator. Her high breeding and royal status has given her an ambassadorial air to her which would enable sound negotiations for the crew.

Would she be okay with Robin? Personally I think she would. She has shown faith in Luffy’s decisions.

She refused the invitation! However they will always be friends, and that opens the door for a potential return.

Her country simply wouldn’t allow it. This is true, but at the end of the day, choosing your own path is a focal point of One Piece and her choosing to be with her friends would support the story’s theme.

In conclusion I believe there is room for argument that Vivi could rejoin the crew. She is close geographically, there may be a motive, she has regrets (something One Piece advocates against) and she has already sailed with the crew. They love her, and she loves them back.

There are clear problems with the theory, and I believe I have adequately mentioned them and argued against them to the best of my ability.

At the end of the day, my belief isn’t that she will join again but that there is a possibility. Nothing is absolute. I am merely arguing for the chance of this occurring.

Whatever happens, I believe Vivi will be in the final battle on Luffy’s side, but will that be as a nakama or a supporter? Only time will tell!

VIVI’S POTENTIAL RETURN TO THE CREW 2017-09-18
admin
Previous: A PROMISE BETWEEN FRIENDS – LUFFY PLANS TO MEET THEM AGAIN
Next: KIZARU & HIS DEVIL FRUIT

Why there’s no “Yonko 1st Commander Level” in One Piece