Luffy has had his fair share of separations over the course of his adventures. On every single island or country he’s visited, Luffy has made friends, enemies, and the occasional enemy-turned-friend, and in many of those cases, said friends have promised to meet up with Luffy again somewhere down the line in his quest.

One of the most prominent examples of this is Jinbe, whom Luffy invited to join his crew at the end of the Fishman Island arc, only for Jinbe to decline. 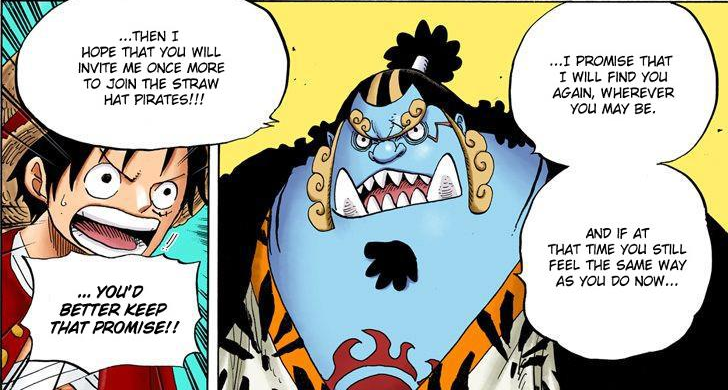 Despite his refusal, Jinbe still promised to rejoin Luffy at a later time, maintaining the close ties of friendship they had forged along the way.

Where we are now in the story, Jinbe has all but officially joined the Straw Hats, so for all intents and purposes most people consider him a Straw Hat already. I believe that the delay between Jinbe’s invitation and his acceptance of joining the crew set a bit of a precedent for the remainder of the recruits for this sea: all of them will either have a delay period between invitation and acceptance or they will all be people Luffy has met in earlier seas whom he has promised to meet again in the New World.

If the former is the case, then the potential recruits may well be people we haven’t met yet. If it’s the latter, however, I have compiled a quick list of possible candidates that match all of the criteria of being on friendly terms with Luffy and promising to meet him again.

For the sake of maintaining a sense of momentum, I’ll start from my weakest candidate and move on up from there. Fortunately for me, the presence of the Straw Hat Grand Fleet gives me a bit of a back-up plan for most of these if I’m wrong about them joining the crew proper.

Our first candidate is Lola, who Luffy and the crew met back in Thriller Bark. After saving Lola and hers from Gecko Moria, the Straw Hats form a close bond with them and promise to meet up with them again one day.

I don’t find Lola a particularly viable option for joining the Straw Hats proper, as a) she is the captain of her own crew who she likely wouldn’t want to leave, b) her promise to meet again isn’t presented with much gravitas and thus doesn’t seem like it’s meant to foreshadow a dramatic reunion, and c) her adventure is taking her in the complete opposite direction, so it’s unlikely that they’ll meet in circumstances that would facilitate her joining. Instead, she may be likely to become a member of the Straw Hat Grand Fleet, or may even serve as foreshadowing of Pudding joining the crew/Grand Fleet. Still, this is pretty flimsy conjecture, hence she is my first example.

Second is Gin of the Krieg Pirates, fought all the way back on the Baratie in East Blue. After Luffy defeated Don Krieg, his attitude rubbed off on Gin and gave him a new lease on life. As Gin forces Krieg to retreat, he leaves Sanji with a message for Luffy: to meet again on the Grand Line.
Gin is also a fairly weak example, as Gin’s character is more heavily focused on his relationship with Sanji than with Luffy, and also the distinct possibility that he died within a day of saying this. Still, that one’s a much stronger promise than the one with Lola, as it was given very specific focus and clearly is meant to build to something later on. I don’t really see Gin joining the crew, but I definitely could see him being an ally, possibly even becoming a Fleet Commander. It’s not too much of a stretch to imagine that he’s been improving over the years, and he’s probably about on par with the rest of Luffy’s Commanders by now. Either way, his involvement in the Baratie arc doesn’t really give the impression that he’s Straw Hat material.

Third is Shirahoshi, the princess of Fishman Island who was imprisoned in her own palace for protection until Luffy won her freedom into the outside world. As Luffy departs from Fishman Island, Shirahoshi asks him to return and show her even more of the world.

This scene is given the kind of attention that just screams foreshadowing, so we can say pretty definitively that Luffy and Shirahoshi are going to meet again, and even the promise itself, to take her above the waves, would be fulfilled quite nicely with her on the crew proper. However, Shirahoshi is no fighter, and while her ability as Poseidon to control the Sea Kings is incredibly powerful, its use is also rather limited to the sea. I have no doubt that Luffy will need Shirahoshi’s power somewhere along the way to finding One Piece, but probably not as a pirate. Still, if she were to join, her role on the crew seems pretty clear; controlling the Sea Kings to act as guides.

Fourth is Boa Hancock, the Pirate Empress who is infatuated with Luffy. After Luffy spent two years training on Rusukaina, Hancock delivers him to Sabaody Archipelago to meet back up with his crew. As they depart, Hancock asks Luffy not to say “farewell,” and Luffy replies that he has every intention on seeing her again.

Again, the scene isn’t made a huge spectacle of, and it isn’t even totally clear who is saying “we will meet again.” It’s a pretty safe bet to say that it’s Hancock, who would definitely serve as a powerful addition to the Straw Hats, but the way it’s framed it seems more like it’s saying that Luffy will meet the Kuja Pirates as a whole again. Also, as I said with Lola, Hancock has her own crew, and more than that, she has her own kingdom to take care of. Sure, she could name someone as her successor and leave, but she doesn’t seem likely to do that given her pride and skill as a leader. She seems much more likely to become a Fleet Commander, and this scene may also serve as foreshadowing for another Kuja joining (possibly Marguerite).

Fifth is Bentham, or Mr. 2 Bon Clay, Luffy’s enemy-turned-friend who has sacrificed himself to help Luffy escape danger twice now, and seems fairly likely to do so again. The second time, at Impel Down, he seemed confident that his life was going to end, and swore to see Luffy again in the afterlife. 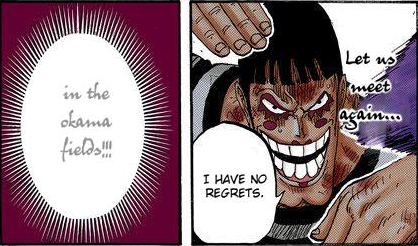 Of course, Bentham did not die, so his promise for a reunion will need to be fulfilled on Earth, not Heaven. Being a close friend to Luffy with no current affiliations with any other crews, Bentham seems like a fairly strong candidate for a new crewmate. The only problem is that he uses a mostly kick-based fighting style, making him a bit too similar to Sanji. Still, if the crew can have two swordsmen with possibly more to come, there shouldn’t be too much of an issue with having multiple kick-fighters.

Not only that, Bentham has even demonstrated in the past that he could take on the role of either a guard for the ship or a decoy as he has already done multiple times. And again, even if he doesn’t join because he’s too similar to Sanji, there’s absolutely nothing preventing him from forming a new crew and becoming a Fleet Commander.

The main problem with Bentham is that while his scene got more than enough attention, he didn’t make a promise with Luffy directly, and as far as Luffy knows Bentham is dead. Still, I don’t see Oda allowing Luffy to think that forever, so I have no doubt that no matter what comes of it, a reunion is just about guaranteed.

This brings us to our sixth and strongest candidate (whom you all likely saw coming), Vivi, princess of Alabasta and former temporary Straw Hat member. After Luffy saved Alabasta, he invited Vivi to join his crew (much he did with Jinbe), only for her to refuse due to personal matters (much like Jinbe did), and then ask to remain their friend should they ever meet again (also much like Jinbe did).

Unlike everyone else on this list with vague similarities to Jinbe’s recruitment, Vivi followed the formula almost to a T; fighting alongside Luffy, being invited, declining, and asking to meet again.

Vivi has also demonstrated her value as a crewmate, serving as a negotiator on at least one occasion, convincing Luffy to let her reason with the people of Drum Island to get a doctor for Nami.

Vivi already has a strong personal connection with Luffy, much like Jinbe did, having earned his trust enough to be able to sway his decisions at critical moments. If she decided she wanted to come back, Luffy wouldn’t even miss a beat and would say that she’s always been a member of the crew. In fact, as many of you know, Vivi is already considered the unofficial Straw Hat 5.5 by Oda, so if circumstances allow it, I see no issue with him allowing to become the official Straw Hat 11.

A PROMISE BETWEEN FRIENDS – LUFFY PLANS TO MEET THEM AGAIN 2017-09-18
admin
Previous: The Wano Country
Next: VIVI’S POTENTIAL RETURN TO THE CREW