THE ANIMALS OF THE REVOLUTIONARY ARMY

The Revolutionary Army is comprised of many characters whom have an animal theme. Based upon this observation, I will explain who could join the army in future if they haven’t joined already, and also explain what to expect from some characters in future. This theory is purely speculation and is highly controversial in places as I know many people are divided on some of the matters I will write about below. 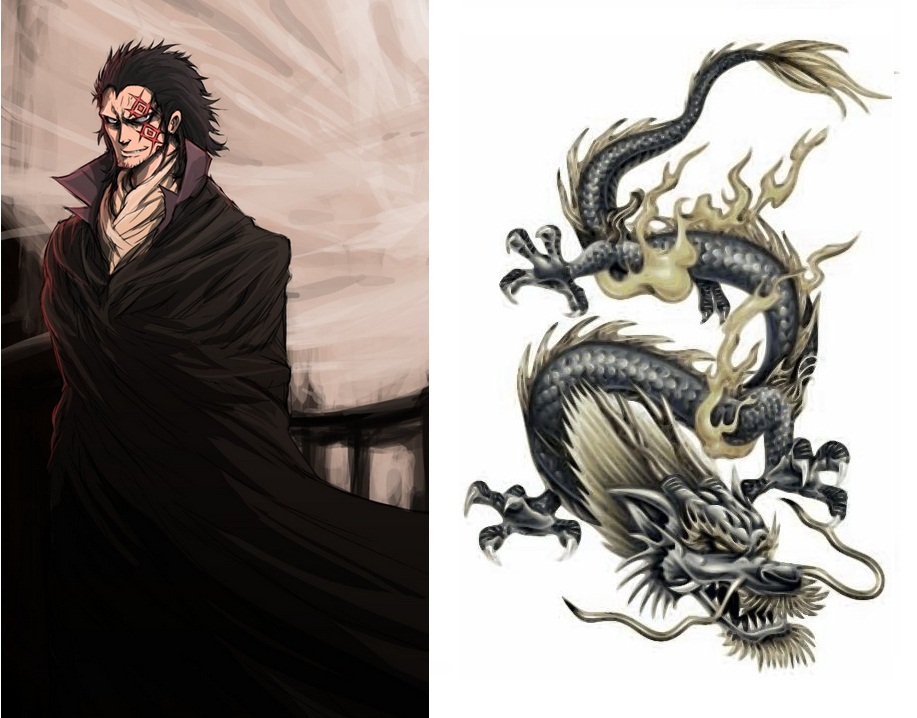 This is one of the more obvious cases. Monkey D. Dragon, unsurprisingly is Dragon themed. His character design features sharp, defined and bold facial features, giving him a dragon-esque appearance. His subordinate and most probable apprentice and student; Sabo fights using “claws” and has Dragon based attacks like “Dragons Breath”, and most likely learnt his fighting style from Dragon himself. Dragon’s ship is enveloped by two Chinese Dragons, one on either side, slicked down the sides of the boat and he draws many parallels to Chinese Dragons in a sense that he can most probably control the weather through unknown means, as seen in Loguetown and Grey Terminal.

We don’t know much about Terry, but he’s clearly Kangaroo themed based upon his head dress/hat thing. I wouldn’t be surprised if he’s a member of the Long-Leg tribe and/or a Kangaroo Zoan fruit user 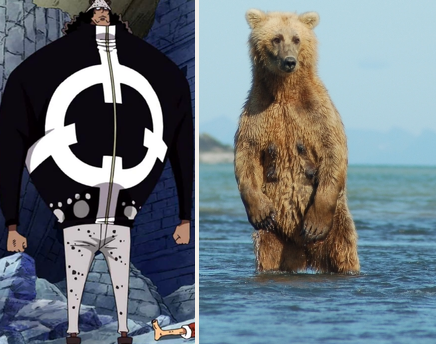 Bartholomew Kuma is bear themed. Kuma translates into Bear, and Bartholomew Kuma has an appearance similar to one. He has Bear ears and an incredible bulk for a torso. He also stands at 6 meters + in height. Although that’s a huge exaggeration of a Bear’s height, some species of bear (in fact, most large species) can stand over 3 meters tall when on their hind legs. His height is another parallel. The greatest similarity of all though is obviously the Nikyu Nikyu no Mi. This gave Kuma paws, like a Bear. Kuma’s face also parallels a Bears. His square skull draws similarity to a characteristic Bear snout (most commonly seen in Brown, Grizzly and Honey Bears). 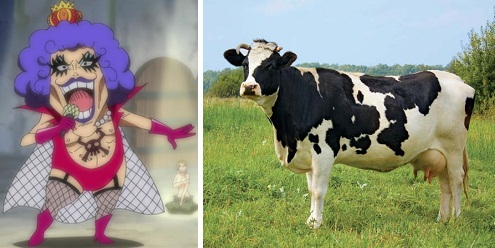 Possibly the hardest to parallel. Ivankov is themed on Cows. His tattoo has horns, like a Bull, and he is of gigantic proportions yet again. His chunky physique bares a slight, although weak parallel. Emporio’s transgender transformations and abilities can be seen as a representation for homosexuality, which is amusingly quite common in cattle.

Inazuma is themed as a Lobster. Many would say a crab, but due to his fine-dining theme, and always drinking Wine, I would say a Lobster as a more luxuriant alternative to Crab meat. His scissors and ability represent the pincers of a Lobster, while his coat colours (Orange and White) are the colours of a cooked lobster.

Sabo, as previously explained is also based on a Dragon. He’s more of a European Dragon whilst Mr Monkey D. is an Oriental Dragon. As stated earlier, Sabo fights using Dragon based attacks. In Western culture, especially Middle-Aged Central Europe, Dragons were consistently described as having fire-breathing abilities and metallic, impenetrable scales (paralleling the pipe and powerful Busoshoku Haki).

Like Terry, we know very little of him, except from his association with Robin and his high ranking position. He is obviously Rabbit themed based upon his name and fluffy hair. He may have a Rabbit Zoan fruit. 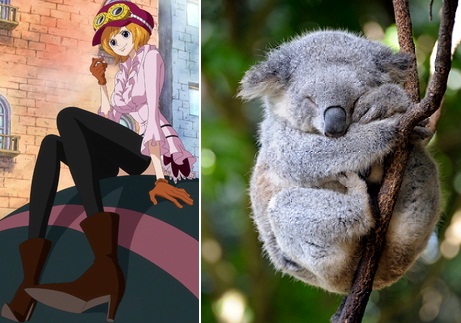 She is obviously based on Koala bears. Not just due to name though: Koala’s are pacifists, and do a lot to avoid conflict or danger: Koala, as a child was incredibly submissive to Fishman demands, this portrays immense fear and avoidance of danger. Koala bears are also highly susceptible to learnt behaviours, which is exactly how she behaved during Jinbe’s flashback.

Obviously, Hack is based upon fish. Due to his ability to use Fishman Karate and being a Fishman.

Now, it’s clear there’s an animal theme. Oda loves to use animal themes and has created many characters following such a theme. Including the original Shichibukai and the Admirals. There are 10 characters we have seen that I believe could join or rather, would join the Revolutionary Army. Namely, these are Kuzan, Crocodile, Bon Kurei, Lucci, Kaku, Khalifa, Blueno, Jyabura, Fukuro and Kumadori. It’s important to note that none of these characters have clear affiliations, although we do know they are all unaligned with the World Government.

Aokiji, meaning Blue Pheasant, is evidently themed on Pheasants. The calming colour blue and his Ice powers from the Hie Hie no Mi also indicate a desire for pacifism and peace, this can be symbolised through birds that have traditionally been viewed this way in many cultures.

I believe Kuzan could join or has joined the Revolutionary army due to his defection from the Marines, although still believing in justice as he explained to Smoker. He acknowledges corruption within the World Government and it is possible he sees the best way to deal with it as a revolution. His association with the Blackbeard Pirates and the fact he can’t be trusted proves he is not a member, but simply working alongside them. The Revolutionary Army runs and operates underground, and does associate with Pirates (as seen with Kuma). Likewise, Kuzan is seemingly operating in the underground trade and as people know only rumours of his activities, including one of the worlds best connected people (Doflamingo), it’s clear he is sworn to secrecy and could easily already be a Revolutionary Commander of the same rank as Sabo.

His name is a giveaway here. He is Crocodile themed. His association with sand through his Suna Suna no Mi can bring about the resemblance to Nile Crocodiles. Crocodile also had pet Bananadiles back in the Alabasta Arc.

Crocodile could easily have joined the Revolutionary Army with Daz bones. They lacked any affiliations after their defection from the Shichibukai and their escape from Impel Down. To boot, his deep ties with Ivankov, probably being an extensive influence on his past, as well as Crocodile’s grattitude to Luffy for helping to break him out of Impel Down leads me to believe Crocodile could have easily been coerced into a Commander position of the Revolutionary Army.

Bon chan is based upon Swans. He dances and uses a lot of ballet based moves, due to the popular Ballet Dances to songs like ‘Swan Lake’, ballet is heavily linked to Swans and elegance. Bon also has a pair of swans on his shoulders.

He may have joined the revolutionary army to follow his idol, Ivankov. Although he’s still stuck in Impel Down right now as seen in his Cover Story page, he could well break out and join the revolutionaries. He also has deepest respect and great friendship between Luffy, and could use Dragon as a way to meet his friend once more. To further strengthen this, he may simply be loyal to Luffy and therefore loyal to Dragon.

CP9 members are animal themed, based upon appearance and Zoan fruits. The obvious ones are Rob Lucci and his Leopard Zoan, Khalifa and her Sheep based Awa Awa no Mi techniques, Jyabura and his Wolf Zoan, Kaku and his Giraffe Zoan. The remaining members, Kumadori, Blueno and Fukuro have similar appearances to Lions, Bison and Owls respectively, and even specialise in techniques based upon those animals, including hair control and Fukuro’s airborne fighting being his specialty. Nero, their newest recruit also happened to look like a Weasel, he even had an alias as ‘The Weasel’.

bon chan cp9 crocodile Emporio Ivankov hack inazuma koala kuma Kuzan Monkey D. Dragon One Piece Theory sabo THE ANIMALS OF THE REVOLUTIONARY ARMY 2015-05-30
admin
Previous: THE RETURN OF A GOD ENEL AT THE FINAL WAR
Next: THE POTENTIAL OF THE MOKU MOKU NO MI