THE CONNECTION BETWEEN “WILL OF D” AND “ONE PIECE”

This theory will explain to us everything about the Will of D  and hopefully tell us what the ONE PIECE is!

Eiircho Oda was inspired from this Tribe Called “Tuatha Dé Danann” that existed in real life and in Irish mythology .

I will Point out the MIND BLOWING similarities between this tribe and the current events in One Piece.

So let’s first state that this tribe is called “Tuatha Dé Danann”.

Tuatha means “tribe of the” .. and Dé is the name of the tribe!
Translates to “Tribe of the Dé”

The second part “Dannan” means “those” it was an extra part made by the monks of Ireland because Irish monks began using to the term “Tuatha De” to refer to Israelites.

So they called it “Tuatha de Dannan” to refer to this Ancient Tribe.

So I’m going to show you the legends of this tribe as how it’s so similar to One Piece.

In the Irish mythology, this Tribe was the one of the first advanced tribes to settle on earth, they were explained as gods or fallen angels who were neither good nor evil, they were also known for having super natural powers, and they came to settle on the earth.

Already so far we have Two similarties!

1- Fallen angels or gods who are not from earth?

Doesn’t this seem like the sky island people of birka who had advanced technology and came to earth to settle down?

2- Super natural powers? Does this resemble devil fruits in One Piece?

Look at this picture, this was the tribe’s symbol.
Doesn’t it look so similar to the ones on the devil fruits?!

This Tribe Dé had a lot of rivals one of them was the Fomorians.
Take a look at how they looked like. 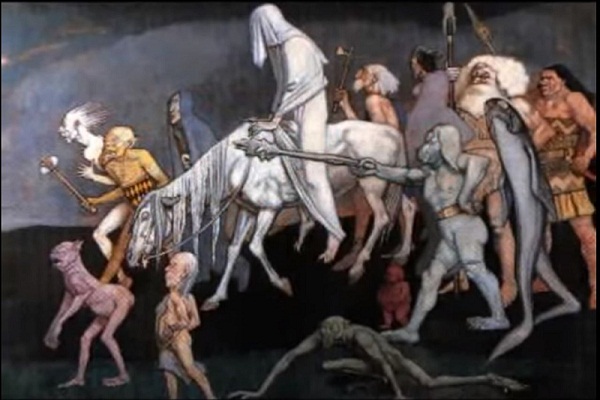 This one resembles a One Piece Fishman!

The second thing in the picture i notice a dog-human thing.
I believe it’s the Minkmen tribe.
The white horse in the back … is Doc Q from Blackbeard’s crew! The resemblance is so similar!

The Tribe of Dé Ruled the world and they shared with the other tribes who existed on earth their advanced technology.

Hmmm , do you remember the Ancient Kingdom of Raftel , it was also said it was an advanced kingdom.

But why did the kingdom of Raftel disappear? Well, let’s continue with this story.

And what’s surprising about this tribe is everything about their history is written down , from the name of their scientists and rulers …. Until at one point of time , nothing at all is mentioned. And their kingdom is erased from history as if they no longer exists.

Some historians said that this tribe vanished because an Army from the Spanish government attacked Ireland and attacked this tribe , and after that they did everything to try to Destroy their kingdom and erase their history.

This is the same thing that the World Government did, and its still doing it to everyone who tries to learn the ancient language of the Ponyglyphs and they get erased from history.

The tribe, Tuatha De Danann had Four Legendary treasures. Which can ONLY be used if you are a descendant of the tribe De , or carry their blood.

So here are the four treasures.

The first one is “the Spear of Lugh” which is a very destructive Spear with very high accuracy, that can hit the target no matter how far it is.

Sounds like something Ussop would use , and that will complete his dream of becoming the brave warrior of the sea.

The Second treasure is “the Dagda’s Cauldron” which is a golden Bowl that never runs out of material or food.

I believe Sanji is the perfect one to use this since he is the straw hat’s cook.

The Third treasure is “The Sword Of Light of Nuada”.

This is known as the greatest sword in the world.

And what’s amazing, lets look at Mihawk’s sword its called Yoru , which means sword of the night.
And this completes Zoro’s dream of being the greatest swordsman in the world.

The last treasure is “The Stone of Fal”

This is what I believe the One Piece is.

This stone is a magical stone that Selects the next King of the Tribe of the De.
The way it selects the king is by talking to him , and only the King of the De can hear the stone.

Does this remind you of how Gol D Roger could hear the voice of all things , and it even said by Silver Rayleigh that they didn’t have the tools or knowledge Ohara did. However Roger could talk to these stones. Which are the Ponyglyphs.

And once Luffy talks to that last stone which is known as the One Piece he will gain the status of the King and the knowledge the stone holds.

Do you remember the first intro of One Piece?

The golden cauldron resembles Wealth.
The spear and the sword resembles Power.
The Stone resembles Fame.

Devil Fruits nakama One Piece Theory straw hat pirates THE CONNECTION BETWEEN "WILL OF D" AND "ONE PIECE" 2016-02-04
admin
Previous: SANJI & ZORO WILL HAVE THEIR SEPARATE ARCS
Next: The possibility of Nami being Luffy’s future wife?