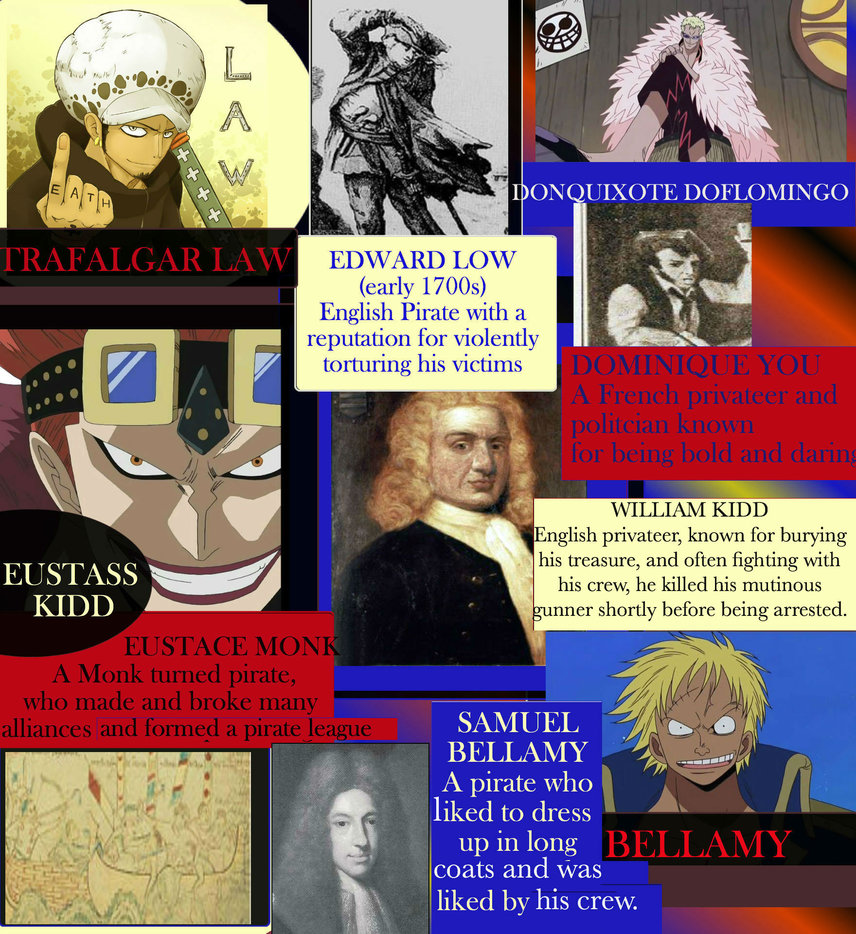 Edward Low: Captain Edward “Ned” Low born around 1690 into poverty in London. His wife died in childbirth in late 1719. Two years later, he became a pirate He captained a number of ships, usually maintaining a small fleet of three or four, burned most of his captured ships, captured about 100. Remains notorious as one of the most vicious pirates of the age, a man of “amazing and grotesque brutality.” When in a rage he resorted to decapitated, burning people alive, forcing them to eat limbs he cut off, etc. he was never caught, ending his days in Brazil.

Eustace Monk: Born in 1170, studied black magic, lived in a monastery for awhile, then left to avenge his murdered father, burning the man’s property down. He then became a pirate in the English channel. Was outlawed at times by England and France, Started up a large band of pirates called the Eustace Brother. Made a home base on one of the channel islands. Would often turn against allies and kingdoms he was allied with.

William Kidd: Some historians argue that his piratical reputation unjust, as there is only evidence that Kidd was a privateer. Kidd’s fame springs largely from the sensational circumstances of his questioning before the English Parliament and the ensuing trial. He thought the ship he was taking was an enemy ship but it was not and so it was deemed piracy by the English and he was tried. As his trial ensued his friends deserted him. He was also accused of murdering his crew member when in truth the member was committing mutiny and Kidd was in the right. He is best known for being one of the only pirates to bury his treasure and did so before coming into port and being arrested as he did not want the Governor to have it. If it were not for his wealthy noble backers, who wished to remain anonymous at all costs and to distance themselves from Kidd in any way possible, his contacts probably would have saved him.

Samuel Bellamy: English pirate in early 18th century is crew captured at least 53 ships under his command. Bellamy became known for his mercy and generosity toward those he captured on his raids. He was part of a mutiny on Captain Hornigold’s ship, Hornigold left Marianne with his loyal followers, including Teach. The remaining 90-man crew then elected Bellamy as captain. He liked expensive clothes, especially black coats. His favorite weapons were four dueling pistols that he always carried in the sash. His captain rules were almost democratic. His crew liked him a lot and sometimes even called him “Robin Hood of the Sea”. Captain Bellamy was also a good strategist. His ship was quick and agile.

Dominique You: A French Privateer and Politician, You was falsely convicted of piracy in the gulf, but the Americans failed to capture him. He had reputation for being very bold and daring. He was pardoned by American for helping them in their war against Britain. He preyed on preyed on Spanish ships. Did meet up and work with Lafitte for a time.

Doflamingo & Bellamy Historical Connections eiichiro oda Eustass Kid one piece one piece hystorical references Trafalgar law 2015-12-28
admin
Previous: WHY THE ‘NATIONAL TREASURE’ ISN’T THE ANCIENT WEAPON URANUS
Next: Who is allied with whom and who is against whom? Here is the Answer!!