I made a couple conclusions after thinking about last chapter:

– Unless Oda is being a massive troll, we can assume Sanji got captured in some way. 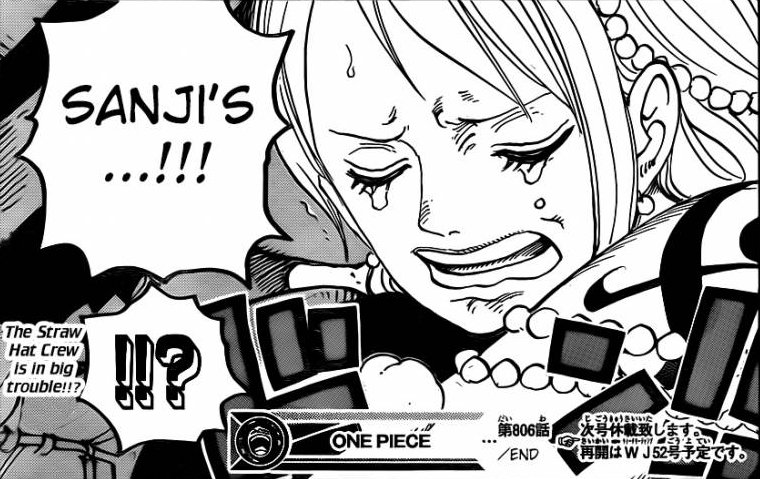 – It’s confirmed that Jack is no longer on Zou.
– The Mink (other than the guards) seemed rather relaxed. That leaves me to believe that there is no IMENENT threat to them as of right now. Also meaning there is no major antagonist on the island at this very moment.
– Chopper was dressed up as a King and the Strawhats were welcomed like royalty with banquet and all.

Following these conclusions i started thinking about what is left to do on Zou. Zou seems like too unique of an island to just hop on, find out about Sanji, and then hop off to go find him. Even if Nami presumes Sanji is dead instead of just captured, Luffy and Zoro (we all know Zoro and Sanji secretly have a bromance) would leave for revenge immediately imo.

So there’s no threat or antagonist right now and when everyone is filled in about Sanji next chapter the Strawhats won’t have time to celebrate with the Mink for too long. Is that all there will be to Zou?

My answer is no and here is why i think why:

I think Zou, or Zunisha, is a living poneglyph. Not like any other poneglyph where text is inscribed into a special rock/stone. The “poneglyph” im talking about is Zunisha’s memory. Zunisha is a ancient elephant that lived over a thousand years. As everyone concluded by now, Zunisha was around during the void century 800 years ago. It experienced what happened during that time. Specifically what happened to the Minkmen during this age.

One of the characteristics of elephants is that they have an amazing memory. I’d say this is needed if u want to recall something that happened 800 years ago. Is it a coincedence that the ancient creature who was around during the void century, also has this characteristic unique to it’s species? It might be, but i’d like to think not.

So poneglyphs are normally Robin’s specialty, but in this case it’s time for Chopper to shine. Chopper hasn’t really had much spotlight in the New World. The only thing of importance he has done in the NW is taking care of the kids on Punk Hazard. I think it’s about time for him to get a moment of great significance.

As we all know, Chopper can talk to animals. Correct me if i’m wrong here, but i believe Chopper is the only creature in the One Piece world that can communicate with ALL other living creatures. That also means he is the only one who could translate between animals and humans or translate from Zunisha to Robin and the rest. Is it a coincedence that the only one who could possibly translate Zunisha’s memories is a Strawhat? Maybe, but the coincedences are stacking up.

I even believe it’s possible that Chopper has already spoken to or translated for Zunisha and that’s the reason why Chopper is dressed as a King.

bepo brook caesar clown chopper franky jack law Luffy minkmen momonosuke nami nico robin One Piece Theory sanji only alive THE LIVING PONEGLYPH zoro zou zou arc 2015-11-14
admin
Previous: How many people would Shanks and the others be able to defeat?
Next: What Blackbeard has originally supposed to be